Most creative work benefits from long periods of focus rather than checking tasks off a list. Meanwhile, most productivity systems that are floating around in books and online are designed for the latter.

I’ve tried most of these systems, along with some homespun ones, but they always seem to fall apart after a while and become more work to maintain than they’re worth in benefits.

What I needed was a simple system that would guide me regularly into long periods of intense focus.

After decades of experimentation with different systems, some patterns have emerged. Even if a system didn’t work, I’d find elements that did.

In piecing together only those elements that have been consistently effective, I’ve found a strategy that works for me.

What a productivity system for creatives needs

It’s important to start with principles. That gives us a compass as we start piecing together the details. For creative work, this is what I’m looking for in a system.

With those principles, I built what I’m calling the Project Immersion Method.

The basics of the Project Immersion Method

The principles of the Project Immersion Method—and why

Do this or do nothing

This was an idea I thought I invented and even wrote about at length several years ago. Then I learned it’s identical to how Neil Gaiman and Jerry Seinfeld famously work. It’s the most indispensable component of this system.

My wife got me an AirBnB in the Poconos for two nights for a small writing retreat, and I was determined to make the most of it.

I knew if I tried to write non-stop, I’d get burnt out. But I also knew if I let distractions enter the picture, I would go home with regrets.

I had an idea: I can write, or I can do nothing at all and enjoy the quiet. I gave myself permission to meditate, think, or stare out the window, so long as it didn’t involve physically doing anything apart from writing.

It was excruciating, at first. I’ve never fought so many urges to grab my phone, turn on the television, go for a walk—anything. But within a couple of hours, my impulses settled and something in my consciousness shifted. Every time I had an impulse for distraction and pushed through it, my mind elevated to another level.

I took great advantage of the option to do nothing. My mind would get tired after a long period of writing. I would set my computer down and look out the window at the beautiful Poconos scenery. I made no effort to think about my story, but in that vacuum, an idea would pop into my mind. My energy would return, and I would immediately grab my computer and get back to work.

Those were the most productive writing days of my life. When I left, I decided I would make this my default way of working and would apply it to all of my pursuits in life.

But I didn’t stick with it—until I implemented the other parts of my system.

In the Poconos, I had a clear timeframe for the “do this or do nothing” strategy. At home, I had to find another way.

First, I tried a milestone-based approach, e.g., “write 500+ words a day.” But creative projects are rarely a single ongoing task with specific milestones. In writing, there’s note-taking, note-integration, editing, planning, and thinking. Even when I was able to stick to the word count quota, the work wasn’t great. It became a daily chore: write my 500 words, tick off a checkbox, enjoy the feeling of satisfaction for filling my daily quota, and move to another task. My mind never elevated to that next creative gear.

Then I ran into another issue. Long sessions were daunting, and if I committed to them, they became anxiety-inducing.

I tried out the concept of tiny habits, popularized by BJ Fogg and other productivity gurus. To illustrate, if you want to build a jogging habit, don’t try to run a 5k every day. Instead, get into the habit of putting on your running shoes. Once your shoes are on, you’ll probably decide to run. But it’s less daunting to think about putting shoes on, so the habit is more likely to stick. And if you have an injury that prevents you from running for a couple of weeks, the shoe habit can continue.

Again, though, I found myself doing my minimal amount, ticking a checkbox, and moving to the next task. Quality creative work often begins after some time immersed in the project. That doesn’t typically happen in 15 minutes. The idea was to continue beyond the 15 minutes, but life has a way of stealing any time beyond what I’ve committed to.

Finally, I found a solution that worked. I would increase my sessions to an hour. But that wasn’t the habit I was building. The habit was to start the timer every day. Simple. Nothing daunting about that. Just start the damn timer. Once it’s going, I don’t even have to work. Again, I’m free to do nothing.

This is what Charles Duhigg calls a keystone habit: a habit that leads to a cascade of other good habits. Once I started setting these timers daily, I found my ability to focus improved. I’m training my mind, and it affects other areas of life.

Why not use the Pomodoro Technique?

Some may have heard of the Pomodoro Technique. The oversimplified version: 25-minute work session, 5-minute break, repeat. Some swear by this, but it doesn’t work for me.

Some days, my mind is energized, and the work flows naturally. Other days, it’s a struggle. I find that if I combine 60-minute sessions with the “do this or do nothing” rule, I can take those short mental breaks as they’re needed. If I’m energized and on a roll, the timer doesn’t interrupt me to insist I break my flow and take a break. I need that flexibility.

When I’m juggling projects, I find it’s better to do multiple sessions of the same project on the same day rather than jumping around.

This is something I learned from Cal Newport, who has been an influence on the philosophy behind my system.

I used to work a little on each of my projects each day. That spread me far too thin. It never felt like I was making any real progress on any of them.

Now I’ve come up with a schedule where, to the best of my ability, I group my sessions. Today, for example, I spent an hour working on my novel, then spent my next two sessions writing this article.

My current schedule—I move these around as needed

Scheduling times and making it flexible

If that works for you, then it complements this system well. But it doesn’t work for me because there’s too much chaos in my life, and I like a little chaos. So, I do something very similar, but with some built-in flexibility.

Codifying rules for flexibility is important. Without flexibility, the vagaries of life will disrupt my system, and it will fall apart. But without some rules governing that flexibility, I might look for loopholes whenever things get tough.

I came up with some rules that allow for a nice balance of limited flexibility:

This is a small act of magic, giving my session weight and importance. It’s a subtle mechanism that helps get into the right state of mind. Rituals are important throughout life. I’ve read that most elite performers and athletes practice rituals before a performance or competition. Creatives should also.

My ritual is simple: I bought an hourglass. When I turn it over, it’s official: my hour of “do this or do nothing” has begun. To do anything else while those sands are still falling would be sacrilege. 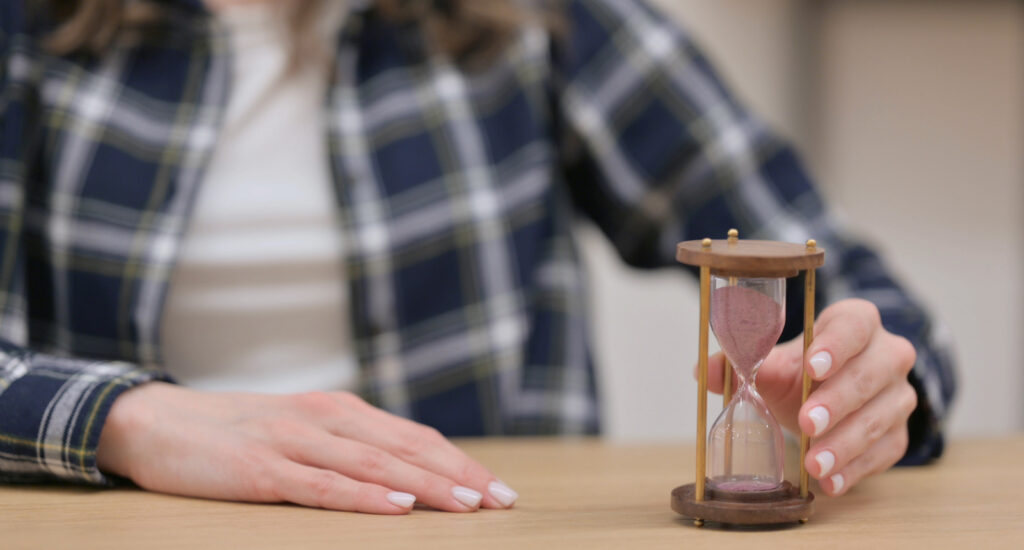 Creativity thrives on spontaneity. If I’m struck by a sudden urge to work, I work, and I don’t bother myself with timers or rituals. Otherwise, I might hold off on working on a project until I have a guaranteed hour available.

Some more concepts that can be helpful

This is something many people overlook.

I work better when I’m shut in somewhere. I work well in the library because it’s an enclosed space and no one is talking. At home, I close my door.

Then I eliminate anything irrelevant that might distract me. If I’m working on my computer, I close any program that might have a notification.

I keep my guitars right next to my desk. When it set a timer to work on a song, I can reach over and grab one easily.

Whatever your project, think how you can make it as effortless as possible.

If distractions are keeping you from your work (and we have many of them these days), this can be a helpful concept.

Ideally, we would all quit our addictions, but if we can’t (or prefer not to), try setting a limiting timer. Play a game for 60 minutes. When the timer is up, you stop.

This system is likely to present some challenges.

I often hesitate before starting my timer. I start thinking, “Are there any things that might come up in the next hour? What if I get thirsty or hungry? Should I pee first? Do the dogs need to go out?” And on and on.

This is all resistance. This is my mind realizing that for an entire hour, it can no longer flit between pleasurable distractions, generating those wonderful and addicting dopamine spikes. It’s a symptom of exactly the sickness I’ve set out to cure.

As soon as that timer starts, the doubts go away, and I’m fine. My mind goes into focus mode and those worries fade away. At the end of the session, the work I’ve produced makes me feel better (for longer) than those ephemeral dopamine spikes ever could.

Besides, the system is flexible, so there’s nothing to worry about. Just start the damn timer.

To learn more about Dane Clark Collins, visit him at his web site, daneclarkcollins.com.